It seems that after months of slow economic starvation AllofMP3.com is finally no more. Over the last few years the IFPI and RIAA have mounted a sustained assault on the site, which followed the letter of Russian law, but sold music in a format (MP3) and for a price (cheap as hell) that the dying recording industry disliked. For the music industry this was a long, hard fight and their victory would be a whole lot sweeter if AllofMP3.com hadn’t already reopened under a different name. The new site called Mp3sparks, has all of the features and functionality you loved in Allofmp3.com. Your old Allofmp3.com username and password are supposed to work on Mp3sparks.com although it hasnt for me. Credit cards are still not accepted on the site but its unclear if thats due to the old credit card monopoly ban on ALLofMP3 or a simple technical glitch. Hopefully, MP3Sparks can fill the gap left by the hobbling (and now full closure of ALLofMP3.com) but until it gets credit card payments up I dont recommend you let your BitTorrent ratio’s slide.

Blinding Glimpse of the Obvious

For some reason folks are acting all shocked that sales of digital music seem to go up when you dont cripple it with DRM. In a piece thats all over the net right now (here, here, here and here) Bloomberg (the news service not the recently independent, non-presidential candidate) is reporting that sales of DRM-free tracks released by EMI are showing significant increases. Again not sure why this would surprise anyone not paid directly by the DRM developers or the RIAA. Its an interesting story that is only going to get bigger as folks like Apple and Amazon push for less restricted music. Of course the P2P side will still dwarf them all but that is a debate for another time.

Amazin’ Phasin’ hipped me to a very interesting video put on YouTube by the folks at the Italian consultancy Casaleggio Associati. The video is a look back at the media landscape from the year 2051. Its interesting for a couple of reasons: 1) its definitely wrong on the details 2) it seems directionally correct 3) its got really cool. Take look at the video and see if it convinces you that the future of big media will be spelled Google.

Lala.com, an online CD trading platform, began offering a limited music locker with free music streaming this week and it pissed off uber-CEO and music locker competitor Michael Robertson. The general reaction to Lala.com’s announcement ranged from the mildly bemused to the historically reflective with most blog post and articles mentioning Mp3.com or Napster as parallels. That wasnt enough for the Michael “lightening will strike as many time as I say” Robertson, who promptly posted a pretty damning “expose” of the details not mentioned in any of the post about Lala.com’s new service. END_OF_DOCUMENT_TOKEN_TO_BE_REPLACED

A must read article over at Rev2.org on the Digg rebellion and its outcome. Two items that I think are really interesting and deserve more thought:
1) spontaneous user protest
2) siding with your users is a winning strategy 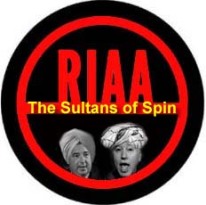 A Pew Research report it aint, but the good folks at P2pnet.net have released the raw data from their online survey of Internet users, entitled “Sultans of Spin“. The data is released under the creative commons license and is in MS access format for easy crunching if your a database geek (I’m not). I mentioned the report last week and while I hear the folks at P2Pnet have caught a lot of flack for the survey its a great resource for getting the pulse of the folks the RIAA’s lawsuits are intended to pawn. If you do anything with the numbers ping me so I can get a look. Here is the data file zipped.

The Death Knell Tolls for Pandora and Other Webcasters

A couple of weeks ago a little known government body called the Copyright Royalty Board set new rates for webcasters like Pandora, Last.fm and other streaming music services. The new rates made many webcasters and streaming music entrepreneurs apoplectic. Only being tangentially related to the streaming music space I was a bit confused by all the doom and gloom talk that had lots of really intelligent and articulate folks claiming that this was the end of streaming radio. It all sounded so over the top that I sent an email to the ever accommodating Tim Westergren, of Pandora, asking for his take on the controversy. I sent him a series of questions largely based on some projections Michael Robertson posted to the Pho List and one of this responses at the time really shocked me.

“There will be no Internet radio by the end of 2007 if these [new rates] go unchanged.”

At the time I thought there was no way that the music industry would allow the mostly legal and fee paying interactive music services to go under. Services like Pandora and Last.fm have been hailed in the media as the new “it” companies for music promotion and fans across the globe embrace these services for music sampling and discovery. But as of yesterday, influenced by the ever present RIAA in the guise of its bastard child SoundExchange, the CRB denied webcasters like Pandora’s attempts to rehear the case. Effectively putting an end to the nascent interactive radio business.

The survival of Pandora and all of Internet radio is in jeopardy because of a recent decision by the Copyright Royalty Board in Washington, DC to almost triple the licensing fees for Internet radio sites like Pandora. Tim Westergren in letter to Pandora commuity

In what seems like a last ditch effort to make a change to the deadly new rates, Tim Westernger sent a letter to the Pandora community asking people to write their lawmakers for a literal stay of execution. If you’ve enjoyed Pandora and Last.fm you might want to go ahead, sign the petition and get involved. Normally I’d also suggest that you go ahead and enjoy Pandora and Last.fm before they go out of business, but since the rates are being retroactively enforced, they apply to everyone that used the service in 2006 and everyone that uses it now, potentially tripling the fees these services owe copyright holders.

ALLofMP3.com: Voice Your Opinion of RIAA

Our Russian friends over at ALLofMP3.com are showing the kind of staying power that would make Lexington Steel proud. Despite being perpetually attacked by the bulldogs of the copyright industries ALLofMP3.com continues to evolve their offering and enhance their site. While checking out their latest upgrades I came across a rather incongruous image on the home page.

It was a link in the news section directing people to take a survey being conducted by the good folks at P2Pnet.net a site dedicated to news with a distint anti-RIAA flavor. The survey is being billed as the first online survey of perceptions of the RIAA and its title, The Sultans of Spin, shouldn’t in anyway skew the results.

ALLofMp3.com decision to feature the survey on their homepage is what struck me as strange. Last year the US trade rep was on the war path and tried to get Russian strongman Vladimir “toxic tea” Putin to shut the site down. ALLofMP3.com responded by starting a half-hearted attempt to get their side of the story out but ended-up just ignoring the public altogether. ALLofMP3 seemed more comfortable trying to avoid confrontations with the IFPI, RIAA and BPI by putting out luke warm statements asserting the legality of their service under Russian law. This is what made the prominent placement of what is clearly anti-RIAA propaganda so shocking. When the upgraded their site did they increase the amount of backboneas well?

A couple of weeks ago Viacom decided to sue GooTube for copyright infringement. What would they gain by getting all their content removed form the largest online video site? Nothing. Except the illusion of control and an RIAA like pyrrhic victory over Google, the Internet’s most successful media company.

In the meantime whats not available on YouTube is easily found on any of the 50 other online video sharing sites. Even the biggest online social network, Myspace serves up full episodes of Viacom content. Are they next on Viacom’s court appearance invite list? You can go to Myspace right now and watch full episodes of the Daily Show, Colbert report and one of my favorite, South Park.

Today the good folks at TechCrunch mentioned AllSP.com but didnt note that the videos on AllSP.com are largely hosted on Myspace. The embedded episode is from DailyMotion but you can see the same thing in its entirety via myspace at the link below. This episode is particularly hysterical in its subversive use of almost every hot internet property as part of the story.

This amazing bit of news was forwarded by Fred Benenson of Free Culture @ NYU. It’s amazing news and a critical development for the online music space. You can get more information at the RARA site and I’ve duplicated their message in full below without commentary:

April 1, 2007 (Hollywood, CA) – In a major break from the litigious and often alienating strategy pursued by the Recording Industry Association of America (RIAA) against everyone from preteens to college students and grandmothers, the four major record labels have decided to drop all pending lawsuits and instead join with Apple and Microsoft to eliminate Digital Rights Management (DRM) from music sales. The companies are joining other personal electronics manufacturers and independent labels in a new organization, Respect the Artist, Respect the Audience (RARA).

END_OF_DOCUMENT_TOKEN_TO_BE_REPLACED

Change Is Good
Create a free website or blog at WordPress.com.