I was getting caught-up with Josh Spear this morning and came across an amazing stunt site TV show vlog, called 2 Husbands. At first blush the concept isnt that interesting. Two single guys want to get hitched and they have turned to the Internet for help. On their site women can upload videos of themselves and visitors to the site vote on who they should marry. Think of it as a mash-up between The Bachelor and American Idol with a $50,000 prize to the lucky ladies who get the most votes. 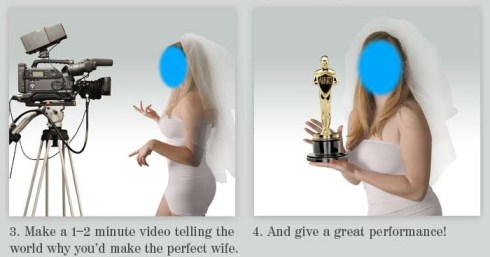 But wait, there’s a twist, one of the guys is gay. Yup, one of potential mates is quite openly, comfortably and happily gay. Now I’m not one to judge the mate selections of others, but I tend to prefer mates who are at least potentially sexually attracted to me. Call me old fashioned.

The site was launched back in November and will run for a year or until it collects 500,000 votes for the various brides. Votes cost $2 a piece, which would give the 2 husbands 1 million bucks to start their lives with their new wives. Of course given how they got those wives the likelihood of keeping that money are pretty slim.

Trendwatching: Eco-fatigue, Gen Z and Pet-Passe the future of marketing!

As someone who watches for trends in technology one of the many sites I frequent is Trendwatching.com. They offer a bevy of free research reports on global Trends with pithy insightful commentary and links. If your not getting their free reports or buying the paid stuff, then your missing out. Their most recent Trend Briefing is by far the best I’ve read so far. They pulled out all the stops for this, their 5th anniversary issue, covering 5 of the hottest trends that are happening right now.

END_OF_DOCUMENT_TOKEN_TO_BE_REPLACED

The Brit tabloid, Mail on Sunday, has come under attack from British music retailers over a promotion its running with Prince (TAFKAP). It seems that the retailers have gotten all bent out of shape because the paper, with 2 million weekly readers, was smart enough to sign a deal with the Purple One to give away free copies of his latest CD. Prince, like most artist, makes the majority of his money from shows and will also be giving away copies of the CD to people who purchase tickets to his concert. The Guardian Unlimited has the full story but this is yet another sign of the utter collapse of the traditional music industry value chain.

Research Tuesday: Research from around the web

Ladies Love Drunk Texting
Ever gotten a drunk text at 3am from a former girlfriend, proclaiming her undying love and mounting desire for you? Maybe this just happens to me… Well, thanks to a new survey put out by Samsung we now have some fun research on these women. Yup folks, the technocrats at Samsung have put out a pretty funny research report outlining some of the cell usage behaviors of single women. The title is a good indication of the rest of the report: “Single Mobile Females Find New BFF: Their Cell Phone“. It’s a funny fast read lite on details with blog worthy data pulls like 40% of women experience “text shame” the morning after texting while inebriated.

END_OF_DOCUMENT_TOKEN_TO_BE_REPLACED

A great new Web 2.0 launch that plans on revolutionizing the restaurant and take-out industries. The start-up has an amazingly ambitious plan to help restaurants and home cooks monetize they excess capacity and inventory while delivering quality, low-cost food options. This is an amazing long-tail opportunity that I never even saw coming. Basically the company connects local buyers and sellers of meals, while redefining who the sellers can be (anyone who likes to cook) and offering their services to a global buying audience. This is one company I’m going to watch intently! Check out their presentation and you’ll see why I cant wait for it to launch!

It looks like the logo for a cool new Web 2.0 company and sounds like the name of a pill to stop geriatric incontinence but Vivoleum is a lot more. Postioned, by the non-evil good guys at ExxonMobil, as a renewable non-polluting energy source, Vivoleum is a major step towards ending American energy dependence. ExxonMobil, hoping to move into more sustainable products, created Vivoleum though a new technique that mimicks the natural process that created crude oil millions of years ago. Details remain scketchy, but Exxon is apparently using billions of pounds of organic matter that would otherwise simply be dumped into the earth and processing that matter to make oil. The ambitious plan was announced at the Go-Expo Energy Conference in Canada and the Canucks were floored by the announcement. Click here for more information and pictures from the event.

Thanks go to Matt Rietman for the story.

Updated: Video Tribute to Reggie Spanglehart Watts, the first ExxonMobil employee processed into Vivoleum. Thanks Reggie, your sacrifice has made the world a brighter place for all of us. I have been so moved by this story that I hope that the good folks at Vivoleum sell some of the Reggie Watts candles in the near future.

The New York Times finds new ways to say the record labels are dead: With the hyperbolic headline “Plunge in CD Sales Shakes Up Big Labels” the NYT outlines the approved list symptoms contributing the labels demise but steadfastly avoids stating any causes.

The software police at the BSA put out a report claiming that “illegal downloading” by 8 – 18 year olds was down 24% over the past 3 years. File this report under official sounding pseudo-science and take it out whenever you need to fertilize your garden. Of the many explanations for the results reported in the survey, my favorite is that with all the lawsuits and media coverage 8-18 year olds have learned how to best respond to online surveys.

The good folks at Big in Japan have stepped in to help everyone who has fallen for Twitter, Jott, Jaiku and WordPress. They created a mashup called Egorcast that allows you to post to all four of these services at once.  Much like Onlywire does for social bookmarking sites, Egorcast is one site to control all your random musings.